How far do Dutch courts go in enforcing religious divorces?

How far do Dutch courts go in enforcing religious divorces?

In the court of Amsterdam, the Netherlands, lawsuits are regularly initiated by Jewish wives who are not resident in the Netherlands. They litigate against their Jewish husbands in order to force a religious divorce. What is the background to these procedures?

Separation of Church and State?

Settlement of a divorce

The fact that a religious marriage has no validity under Dutch law does not mean that couples in the Netherlands cannot have a church wedding as well as a civil wedding. Suppose this is the case and that the parties want a divorce. For the civil divorce the Dutch Civil Code applies, and for the religious divorce the rules of the religion apply. A civil divorce is simple in the Netherlands, a spouse has only to declare in the procedure that the marriage is irreparable; the civil court in the Netherlands thus takes a positive stance to a one-sided application for divorce. But how, then, should the civil court proceed in the case of a religious divorce?

One would expect that the Dutch court would not involve itself in in religious divorces, given the separation of Church and State and the freedom of religion. Above all, Dutch law does not recognise the religious marriage. But: a religious marriage is seen as a social reality. The Dutch Supreme Court recognises not only the importance of freedom of religion, but also that of the personal freedom rights of women who are imprisoned in a religious marriage that cannot be dissolved. These personal freedom rights are not only underpinned by national law but also by international convention.

In 1982 the Supreme Court of the Netherlands judged that a man who keeps his wife imprisoned in a religious marriage acts unlawfully toward her. Unlawful action is a doctrine from the Dutch Civil Code on the ground of which a person can be ordered to pay damages or to carry out or desist from a certain action. The Supreme Court in this particular case came to the conclusion that the man was acting unlawfully and ordered him to appear at the Jewish rabbinic court in Amsterdam. He was ordered to co-operate in this religious tribunal in bringing about a religious divorce, and if he did not do so he would be fined. This fine functions as a driving force in bringing about the religious divorce.

The Supreme Court’s decision has been received with mixed feelings by the Jewish community in the Netherlands. On the one hand there were people who viewed the decision as a good solution for Jewish women trapped in their marriage. From that perspective, the judgement of the Supreme Court is a welcome support that rectifies the imbalance of power between the parties. But there were also counterarguments.

Criticism of the decision

In the view of the critics, the decision affects the nucleus of their beliefs and can be seen as interference in their religion. According to them, it is up to the Jewish religion itself to find a solution for imprisonment in a marriage and replace the Get with a different system – or not, leaving the rules unchanged. As long as no agreement has been reached on the matter the rule should remain. That is then an internal question of the Jewish religion, in which the civil court should not interfere. However, some other countries also have methods to encourage a man to co-operate in the Get, thus the Dutch court is not alone in its approach.

The decision in practice

In the years after 1982 Jewish religious divorces have regularly been applied for in the Dutch courts. Provided the conditions of the highest court in the land were met, the spouses concerned were also ordered to co-operate in the religious divorce. Some years ago this notable route was also discovered by Jews not resident in the Netherlands. Apparently the Dutch approach to the problem has received international recognition. What is more, the rabbinic court in Amsterdam has turned its attention to the problem of imprisonment in a marriage. The Ben Dith in Amsterdam professes to specialise in agunot cases. Because some countries do not have comparable legal options, this route has come into the international spotlight.

Consequences if there is no defence

On 9 October 2008 the court of Amsterdam issued a notable judgement. A woman resident in the Netherlands demanded that her husband, who did not live the Netherlands, should co-operate in a religious divorce at the rabbinate in Amsterdam. The husband did not appear at the hearing and thus did not submit any defence. Under Dutch civil procedural law the plea is then granted. In this situation the husband could have argued that the Dutch court was not competent, but he did not react. The husband was ordered to co-operate in the divorce and if he refused he would be subject to a fine of a maximum of € 100,000.

The husband paid a high price: judgements of Dutch courts are recognised under international conventions in most European and some other countries. In the case of recognition of a court order from another country the content of the procedure is not gone into. The husband was thus confronted in his own country with a valid Dutch decision that he could no longer contest. He had no other choice than to co-operate in the divorce or pay the fine. This decision thus resulted in the approach of the Dutch court being exported to a foreign country.

It is not so that every international case presented to the Amsterdam court succeeds. In 2017 and 2018 claims submitted by wives were rejected. In the case Fried vs. Fried the provisional court issued a verdict on 4 December 2017. The wife lived in Israel and the husband lived in the United States. Although neither party lived in the Netherlands, the Dutch court declared itself competent. The reason for this was that the Dutch court can declare itself competent if a provision is requested that must be implemented on Dutch soil. This is a unique jurisdiction rule stemming from Dutch civil procedural law. The rule only applies to summary proceedings. The consequence of this jurisdiction rule is that the Dutch court can be competent alongside a competent court of the country of residence of the parties.

The position of the Amsterdam rabbinic court

The reason why the provision applied for had to be treated in the Netherlands was that the rabbinic court in Amsterdam is specialised in agunot cases. In this case the plea submitted was rejected by the court on other grounds. This reasoning related to disputing the special position of the Amsterdam religious court. The wife had given no clarification on the subject. The husband disputed that the Amsterdam rabbis have a special competency to treat international cases.

The court declares itself not competent

The primary defence of the husband was that the court is not competent if the parties have no special connection with the Netherlands. They did not have Dutch nationality, nor were they resident in the Netherlands. The Amsterdam court accepted this defence. The court did not comment on the special position of the rabbinic court, but the wife had also not provided much information on the subject. It appears that the Dutch court is more reticent in treating Jewish religious divorce cases. That does not, however, mean that Jewish women who do not live in the Netherlands cannot still try to submit their case to the Amsterdam court, because similar cases have succeeded in the past.

Risk of a judgement in absentia

Jewish husbands who are not resident in the Netherlands can still be confronted with a summons to appear before a Dutch court. If they do not respond and do not engage a Dutch lawyer, these men are at serious risk because they could later be confronted with a Dutch judicial decision whereby judgement has been given against them, which can result in payment of a substantial fine. The defence that the Dutch court is not competent will in any event have to be submitted. If that is not done, the court can assume that it is competent.

Our office has in the meantime treated more cases in this special legal field and has acquired much knowledge on the subject. 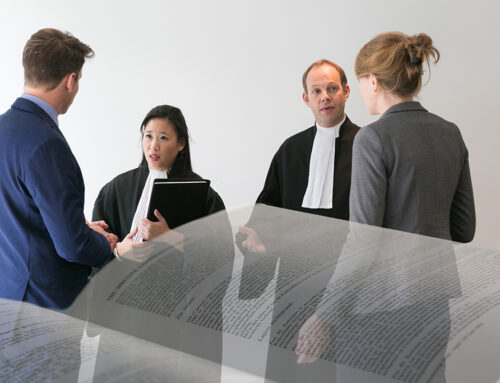 What does undue payment mean?