States are sovereign and it is not self-evident that a court decision from another country is recognized. However, there are treaties on the basis of which a decision of a foreign court in the Netherlands can be recognized and enforced by the bailiff. In the absence of a treaty, a special arrangement applies: art. 431 Rv.

In principle, there are two possible routes to enforce a foreign judgment in the Netherlands. In this article we assume that legal proceedings have taken place abroad between two parties, that the foreign court has rendered a judgment. The route to be followed depends on the answer to the question of whether or not the Netherlands has concluded an international treaty with the country that issued the court decision, or whether the country in question falls under a European regulation together with the Netherlands.

The new European EEX Regulation (Brussels I-bis) applies to all civil and commercial lawsuits started after January 10, 2015. Judgments in cases that fall under the new EEX are directly recognized in the EU member states that are party to the treaty. All you need to do is request a certificate from the court that issued the decision. The possibility to challenge a decision given abroad is very limited. Under the old EEX regulation, the recognition procedure was more difficult. An exequatur (leave to enforce a foreign judgment) had to be applied for. The possibility that a foreign judgment is recognized in the Netherlands can also arise from an international treaty.

No treaty or regulation applicable

If in the situation in question no recognition or enforcement convention applies and no European regulation is applicable, then a judgment from a court from another country will not be recognized and the case will have to be heard again before the Dutch court. This rule is laid down in art. 431 of the Code of Civil Procedure (Rv). art. 431 DCCP reads as follows: “(1) Subject to the provisions of Articles 985-994, neither decisions rendered by foreign courts nor authentic instruments drawn up outside the Netherlands can be enforced in the Netherlands. (2) The cases can be heard and settled again in the Dutch court.”

Is the article correct in legal practice?

If your art. 431 Rv. then reads paragraph 1 in the first place refers to treaties that make recognition possible. Subsection 1 then provides that if no treaty is applicable, the foreign judgment will in principle not be recognised. In other words: at first sight, a foreign ruling from a country that does not have a treaty with the Netherlands or a country that is not subject to an EU regulation has no value. To top it off, paragraph 2 provides that the lawsuit can be heard again in the Netherlands. The article therefore suggests that a judgment given with difficulty after the provision of evidence must be repeated completely, in other words: that the judgment of the foreign court has no value for the Dutch court. However, this appears not to be the case on the basis of case law. Read on here if you want to know more about this case law. 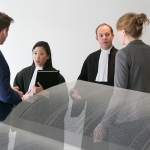